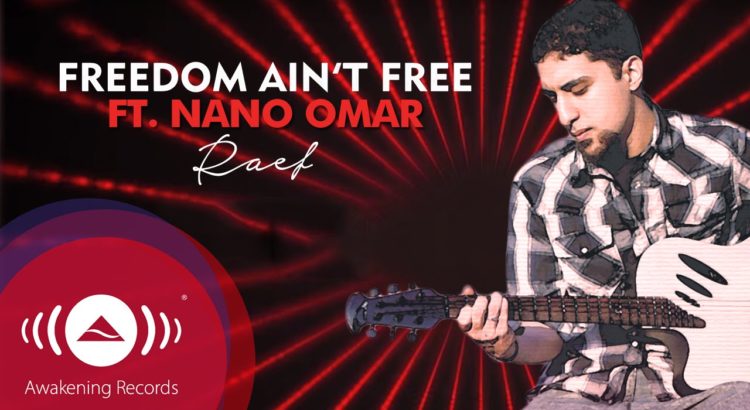 A number of huge artists spring to mind when thinking of Awakening Records: Maher Zain, Harris J and Humood. Among the talent is an American-Egyptian named Raef.

Raef has had huge success in countries such as Indonesia, and recently performed as part of Maher Zain’s UK tour. Like Harris J, Raef has featured in his own TV show in Indonesia titled ‘The Journey of the Backpacker’.

The track ‘Freedom Ain’t Free’ is an upbeat, energetic song teaching us about the reality of freedom and how we sometimes have to work hard in order to obtain it.

Raef speaks about fighting a number of times in this track. This could be in the form of protests, struggling and pushing for a change. It may also refer to fighting in the physical sense – see my analysis on fighting and Islam in the ‘Links to Quran and Hadith’ section below.

There is not an official music video as of yet, however the lyrics video can be found below.

Let’s go through the lyrics, calling out references to Quran and Hadith.

All I own, my whole life
Is worth nothing if I’m not free
I will fight tyranny
I’ll break the shackles holding me
If we can reach the stars above, even though they seem so far
We’ll change the world, we’ll overcome, revolution starts with me

Pre-chorus:
In the face of evil, the way of danger, yeah
I will be strong
Yeah the storm clouds are coming, and no we ain’t running
Yeah, we’ll fight on!
And I will say

If we stay silent
We’ll see injustice spreading wide
When freedom calls, I’ll be there – 2
Stand by my side it’s our time to fly
I’ll stand my ground till my voice is found
It’s either death or liberty
O Lord above, give us strength
And grant us victory!

God made me free
So who’s gon’ stop me ?
I’d give my wealth, my life
‘Cause it’s my destiny
I was born a fighter
Come on let’s stand together
Make the world better
Pray for sunny weather

It’s time to let go
Of your inner ego
Stand by my side my brothers
Come on and let’s go
To a higher ground
Where peace and love is found
Storms are rolling, we’re coming
We ain’t gon’ back down!

Freedom is not always readily available. Sometimes you have to fight for freedom in the form of protests, patience and negotiation. Another form of fighting is of course the physical aspect.

What does the Quran say in reference to fighting and war?

The Quran encourages us to be fair, righteous and kind to people. Muslims should only fight for self-defence (i.e. they are being attacked) or if they are being driven out of their homes.

“Allah does not forbid you from those who do not fight you because of religion and do not expel you from your homes – from being righteous toward them and acting justly toward them. Indeed, Allah loves those who act justly.” (Quran 60:8)

Of course, this does not mean we should take the law into our own hands and start fighting people on the street. Rather the verse implies that Muslim nations are allowed to deploy their army under these circumstances.

Furthermore there are many rules associated with war:

“Fight in the cause of God those who fight you, but do not transgress limits; for God loves not aggressors” (Quran 2:190)

One example is the ruling around mercy. Let’s say a solider is captured on the battle field and asks for protection. Islam requires that you not only stop fighting with them, but also protect them, escort them to security and teach them about Islam.

“And if anyone from the polytheists seeks your protection, then you may protect him so that he may hear the word of The God, then deliver him to his safety/security. This is because they are a people who do not know” (Quran 9:6)

Muslims should also respect the environment at times of war. An army official is not allowed to cut down fruit-bearing trees, destroy inhabited places or harm animals even during a war – this shows the compassion of Islam. What army official in today’s society would put forward rules like this? Perhaps only if Greenpeace went to war!

“I advise you ten things| Do not kill women or children or an aged, infirm person. Do not cut down fruit-bearing trees. Do not destroy an inhabited place. Do not slaughter sheep or camels except for food. Do not burn bees and do not scatter them. Do not steal from the booty, and do not be cowardly.” (Bukhari Volume 004, Book 052, Hadith Number 257).

2  When freedom calls, I’ll be there

There was a point in time where Muslims were forbidden from fighting or going to war. Allah then revealed verses that gave permission to fight under certain circumstances. A number of people asked why fighting should be the solution. Allah replied by questioning them, asking why they did not wish to fight when men, women and children were being oppressed in the land, calling out for help.

“Have you not seen those who were told, “Restrain your hands [from fighting] and establish prayer and give zakah”? But then when fighting was ordained for them, at once a party of them feared men as they fear Allah or with [even] greater fear. They said, “Our Lord, why have You decreed upon us fighting? If only You had postponed [it for] us for a short time.” Say, The enjoyment of this world is little, and the Hereafter is better for he who fears Allah . And injustice will not be done to you, [even] as much as a thread [inside a date seed].” (Quran 4:77)

The nasheed it catchy and has great flow, making it addicitve. Furthermore Raef touches upon a really important issue that is not easy to talk about in today’s society.

If you like this review I feel you may also enjoy Not In My Name by Safe Adam. It contains a similar message to what I have spoken about in this review with regards to fighting and war in Islam.